As of tonight, Centralized Traffic Control is in effect from Sunset (the station formerly known as Switch 10) to Page.  Control Points have been installed and programmed from Sunset to North Hill Valley,  with an intermediate signal at the Page tunnel. 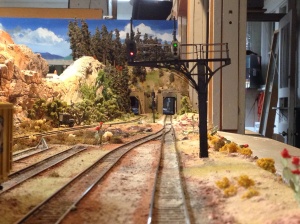 Train detection is by a combination of current sensors (4 Digitrax BDL168s) and scratchbuilt optical sensors masquerading as ties.  The layout was originally rewired in early 2013 with no provision for optical detection, but once the first signals were installed it was clear that detecting only locomotives and lighted cars was unacceptable – signals tended to clear in the middle of long trains or take multiple car lengths to drop at O/S sections.

Dispatcher control is from JMRI, on a Union Switch and Signal type panel.  Fleeting capability allow long strings of trains to follow each other without dispatcher intervention, and the panel logic prevents the dispatcher from directing two trains into a cornfield meet.

The new signals should make this year’s Fair slightly less stressful – no more need to remember whether the tunnel through South Mountain is clear!

This entry was posted in Uncategorized. Bookmark the permalink.